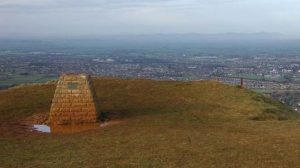 During the first Covid-19 lockdown in 2020 I found that height data on a 50-metre grid can be downloaded from the Ordnance Survey website: OS Terrain 50 (OS data © Crown copyright and database right 2018).  This enabled altitude shading on the moth distribution maps for Gloucestershire which I produce, but later I thought of another use for the data.  It shouldn’t be too difficult to write a computer program to use it to determine what should be visible from a viewpoint such as Leckhampton Hill.

A practical use for school trigonometry!  Taking a 200Km square with the hill at the centre, the first stage was to recalculate the OS height data (at all 16 million points in the square) relative to the height of the hill, taking the earth’s curvature into account.  The next stage was to work outwards from the centre of the full-size square, at each step taking a square (initially very small, ending up with the outer edge) and working around it to determine which of the 50-metre points on it should be visible from the centre, and which should be obscured by closer land.

This seemed to work, and enabled a map to be plotted by the program showing what should be visible.  Some of the places on it were obviously correct, such as Sugar Loaf, Hay Bluff and the Malvern Hills.  This map included 10Km grid lines, making it easy to find the visible hills on an Ordnance Survey map.

The final step was to make a linear horizon graphic for each side of the square, looking west, north, east or south.  On this the points which should be visible are plotted horizontally according to their compass bearing (on the OS grid, which differs slightly from magnetic compass bearings) and vertically from the angle of view plus an addition proportional to their distance from the viewpoint.  This addition had the useful effect of introducing gaps between far hills and the nearer hills in the same directions.  To show approximate distances the points within 20Km were plotted in pale grey, then green for 20-40Km, blue-grey for 40-60Km, dark red for 60-80Km and dark grey to black for more than 80Km.  Sea level at any distance is plotted as blue.

Only extracts from the west and north horizon views are given here because of the very limited views to the east and south.  They are marked up with OS grid compass bearings, and I have labelled a selection of far locations.  To check how accurate they are would require a very clear day, perhaps after heavy storms have cleared the air.  The kind of day when some detail and colour can be seen on the Clee Hills to the right and well beyond the Malverns.  Most days aren’t like that, and it is not unusual for it to be difficult to make out Sugar Loaf, the Black Mountains and Hay Bluff, let alone the Brecons in the far distance.  But sometimes they can be seen even without using binoculars, extending from the right side of Sugar Loaf at about 271 degrees.

Rather more difficult to see because only a little is showing above a closer hill is The Wrekin in Shropshire.  This is at 340 degrees, and is 95 Km away.  Under less than ideal visibility conditions in December I saw it through binoculars, and took a photo with the camera lens on maximum zoom.  A clip from this photo is given here, with the brightness adjusted in an image editor to make it easier to make out the top of the Wrekin (the arrows point to this).  It is a colour photo, but in the distance everything looked grey!

Refraction slightly curving the path of light in the air close to the Earth’s surface was not taken into account when constructing the view graphics.  Its effect can be approximated by treating the Earth as having a larger radius, multiplying by a factor of 7/6 being suggested on some websites.  From some viewpoints this would bring further hilltops into view, but these would usually be even more difficult to see than the furthest in straight line-of-sight.

The Wrekin just visible in the far distance