Conservation grazing by cattle is undertaken on Charlton Kings Common – see below for the background on this.

As of 1st November 2021 the conservation grazing is being undertaken by Heritage Graziers using a mixed herd of British Whites and English Longhorns, and utilizing the latest ‘Nofence’ virtual fencing technology to help manage the cows and focus their grazing on important areas. 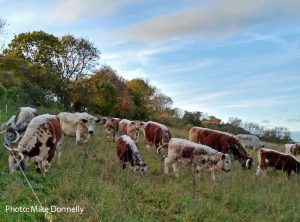 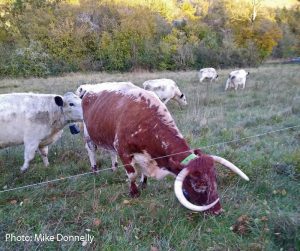 All the stock are docile in nature and are used to grazing on sites with public footpaths and dogs. Native livestock tend to be more relaxed and English Longhorns are renowned for their gentle behaviour, as are British Whites. They are, however, large animals and don’t like to be threatened so taking care around them and keeping your distance is always advised. Where possible the virtual fencing will keep the cattle off the main paths to help. There will be no bulls on site.

The cattle wear ‘Nofence’ GPS linked collars.  A virtual paddock can be drawn in the controlling app which defines the boundaries of where the cattle are allowed to move.  Should any of the cattle approach a boundary, or virtual fence line, the collar will play an audible tune which they recognise as indicating they should go no further.  This system has proved to be very effective and will be used to restrict where the cattle can roam and graze.  The virtual paddocks can be changed as and when required, e.g. to get the best conservation value from grazing or to keep them away from footpaths. 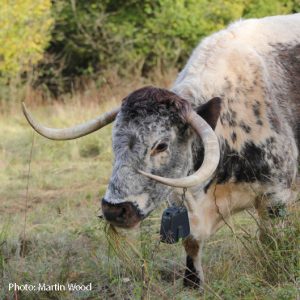 Other advantages of the ‘Nofence’ system is that, via the app, you can see exactly where each animal is and plot their tracks around the paddock.  This can help how to understand their movements and how best to use/control them.  Members of the public can see where the cattle are by linking to https://www.heritagegraziers.co.uk/where-are-the-cows.  This will allow people to know where they are and plan their route accordingly, e.g. to avoid them or to go and see them.

How should people behave when in the same area as the cattle?

Where possible the cattle will be kept away from the main footpaths using the ‘Nofence’ system but it is possible that people will come into contact with them, e.g. if they are using the smaller tracks across the site.  If they should do so then the general guidance is as follows:

The cattle may be inquisitive.  Don’t panic.  Most cows will stop before they reach you.  If they appear to follow you, just walk on quietly.  When near the cattle, keep walking and try not to disturb them by making loud noises.  If possible, walk around groups of cattle, rather than through the middle as they may try to regroup.  If necessary find another way around and rejoin the path when you can.

As above for walkers plus…  As a general rule dogs should be kept on a short lead when in the presence of livestock and long or extending leads should not be used. This is the preferred option for our site.  However it is recognised that some dogs are particularly obedient and will stay at an owner’s side and hence this is not a rigid rule.

Ideally dogs should be kept away from close contact with cattle, for their own safety as well as that of the cattle.  It is likely that the cattle will just ignore dogs but, if your dog has disturbed the cattle and they feel threatened they may chase after it.  If you feel your dog is being threatened by the cattle in any way, do not try to hold on to your dog, or let it try to hide behind you.  Let it go, a dog can outrun the cows, you can’t!  Generally it is any potential threat from dogs that cows may be trying to see off, not people.

As for walkers above, try to keep a distance from any cattle and do not cycle at them or through them, go around them.  Also, slow down when anywhere near them, particularly when they may not be aware of your presence, e.g. when you approach from behind. Please call out to them to let them know your presence if they haven’t seen you.

Leckhampton Hill and Charlton Kings Common are classified as a Site of Special Scientific Interest (SSSI). This is mainly due to the ‘unimproved limestone grassland’, which is defined by the Cotswold AONB organisation as

“wildflower rich grassland that has not been affected by modern farming methods. The grassland has not been ‘improved’ with fertilizer or herbicides or reseeded to produce more grass for agriculture.  It is found on shallow, free draining and alkaline soils”.

SSSIs are protected by law to conserve their wildlife and/or geology and as such an approved management regime is required to maintain and, if necessary, improve the important characteristics of the site. One of the best ways to manage grassland for conservation purposes is to use livestock grazing.

The main area of grassland on the site is Charlton Kings Common and livestock grazing, originally by Dexter cattle, was introduced here in 2004.  From 2004 to 2011 grazing was performed using a temporary paddock system whereby the cattle were retained in small sections of the site by temporary electric fencing.  This was a very labour intensive system, using up a lot of FOLK work party time, as the paddocks needed to be moved to a new area every few weeks.

In 2011, following the re-instatement of the Cotswold stone wall along the southern edge of the Common, and the fencing of the remaining perimeter, an extensive grazing regime was started.  This regime allowed the cattle to range freely across this large enclosed area  with the cattle deciding for themselves where to concentrate their efforts. 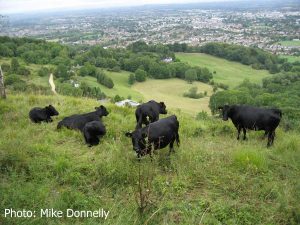 Dexter Cattle on the Common

In 2021 the site owner, Cheltenham Borough Council (CBC), decided to change the grazing regime in two important ways.  Firstly, to stop grazing during the flowering season to better enable plants to set seed and propagate.  Secondly, to better control cattle movement and where they graze by using the ‘Nofence’ system (see above).  It is expected that these changes will improve the conservation value of the grazing.

In association with these changes a new grazier has been given the contract by CBC to undertake the conservation grazing on the Common and they are using a mixed herd of British Whites and English Longhorns which was brought on to the site on 1st November 2021.